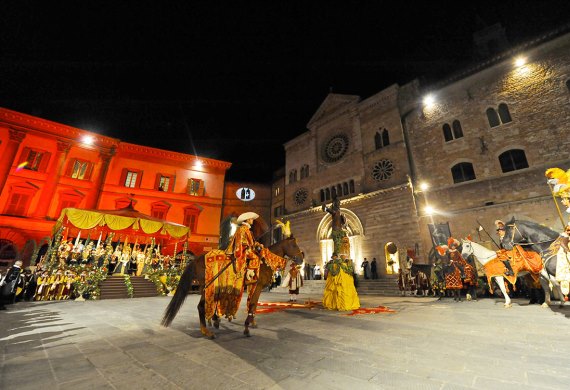 In September the Giostra della Quintana takes place in Foligno, a chivalrous tournament in costume in which the 10 districts of Foligno compete

Traditionally it is held twice a year: in June the Challenge, in September the revenge

The 2 weeks preceding the Joust, the city comes alive with the opening of 10 taverns in the city’s 10 districts, where you can taste 17th century recipes prepared with local products.

On Friday the city of Foligno traditionally becomes the setting for a great historical parade in which hundreds of costumed figures participate.

The competition consists in making 3 laps on horseback of the ancient stadium of Foligno (Campo de li Giochi) in the shortest possible time, inserting three times with the spear a ring hanging from a statue of the god Mars (the so-called “quintanone”) without receiving penalty. The diameter of the ring decreases progressively in the three turns (6 cm, 5.5 cm, 5 cm). The rider who finishes the course without penalty and in the shortest time wins.

The name Quintana derives from the 5th street of the Roman camp, the one where soldiers were trained to fight with spears. 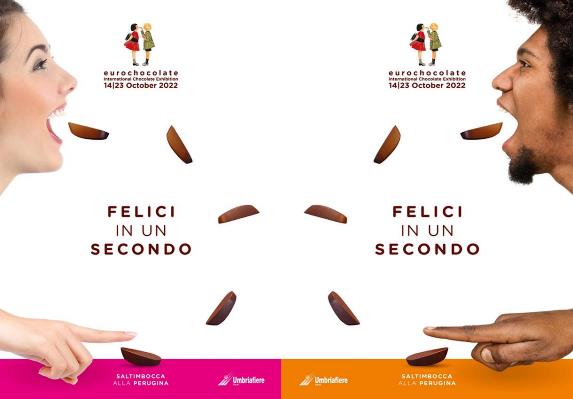 The 14,000 sqm. of Umbriafiere will host the 28th edition of the festival dedicated to Chocolate

Eurochocolate is now an unmissable event and appointment for all gourmands and chocolate lovers with over 6,000 Italian and international products presented by more than 100 artisanal and industrial confectionery brands.

The three pavilions of Umbriafiere, easily reachable thanks to the rapid road connections, will host as many colorful themed areas characterized by important scenographies: Chocolate Experience, Chocolate Show and Funny Chocolate. Didactics, entertainment, guided tastings, games, workshops for children, entertainment and a large chocolate market will accompany the visit of the chocolovers who will be able to access the event in an orderly manner thanks to the development of an access control service that will also leverage ticketing. (by reservation and on site during the event) accompanied by delicious gifts.