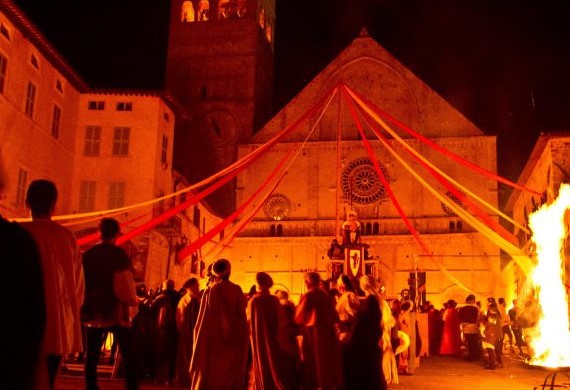 The Calendimaggio of Assisi (sometimes also transcribed Kalendimaggio) is a festival that is celebrated every first Wednesday, Thursday, Friday and Saturday after May 1st of every year, to greet the arrival of spring. The two Parts into which the city is divided, the Nobilissima Parte de Sopra and the Magnifica Parte de Sotto, compete for the conquest of the palio, through the development of processions in medieval costumes (about 13th century – mid 15th century), scenes recitations of re-enactment of medieval life in the alleys of the city and musical performances: the winning Party is decided by a jury, made up of internationally renowned experts, that is, a historian, a musicologist and a personality from the world of entertainment.

During the days of Calendimaggio, through the alleys of Assisi, you can relive the atmosphere of the typical medieval festival, with songs, music and jousting; the festival has ancient origins, dating back to the ancient tradition of the Umbrian people to greet the arrival of spring.

In these days, the people of Assisi wear traditional medieval clothes and follow a series of initiatives, including the suggestive Palio del Calendimaggio.

16:00
Departure of the Parade of the Calendimaggio Organization
Town Hall Square
Choir of the Parties – Performance of the Curfew Hymn
The Field Master assumes the sovereign powers
Entrance of the processions. Return of the Palio.
Greetings from the President-Magistrate – Presentation of the Jurors.
The challenge.
Exit of the processions to Corso Mazzini and Piazza Santa Chiara

9:30 pm
Sound of the Laudi Bell
Entrance of the Evening Parades

Saturday 7 May – “The Challenge”
15:30
Town Hall Square
Sound of the Laudi Bell
Entrance of the historical processions
Reading of the notices of challenge
Exit of the processions to Corso Mazzini and Piazza Santa Chiara

“The singing”
9:30 pm
Sound of the Laudi Bell
Singing challenge
Awarding of the Palio