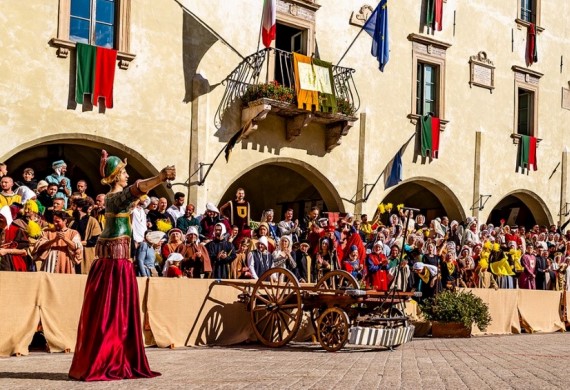 From 4 to 27 October in Trevi, a month full of initiatives, starting with the Palio dei Terzieri.
Throughout the month of October, Trevi hosts the many events of October Trevano. It begins on 4 October with the opening of the Taverns and the Convivium dei Terzieri and continues for the remaining thirty days with historical re-enactments, film reviews, concerts, markets and theatrical performances.

On the eve of the Palio, a sumptuous procession of over five hundred figures in medieval costume winds through the city streets lit by torches and decorated with flags, banners and banners, in a suggestive medieval setting. The draw is thrilling for all the Trevano people, with the hope that luck will bring each Terziere the desired starting ranking. The evening will be framed by medieval music, dances and performances that start the awaited race and will end with the winning of the Palio and the assignment of the title of “Antepost” to the Consul of the winning Terziere.
On Sunday 6 October the XXXIX edition of the Palio dei Terzieri will be staged, recalling the tenacity and ardor with which the young Trevani people re-emerged their city from the destruction that occurred in 1214 by the Spoleto inhabitants by the will of Duke Theopoldo. Twenty young “Color-bearers” compete for each Terziere who alternate, in several relay races, in the arduous and exciting race, during which one pulls and the others push the cart with all their might. There is no respite between one change and another: after the passing of the baton, you have to keep running to reach the square within two minutes of the bell of the bell being touched. The Terziere who took less time and committed fewer irregularities wins.
Among the many initiatives on the calendar, do not miss the Black Celery Exhibition in Trevi, scheduled for 19 and 20 October.

Presence of maxi screens in both squares for procession and palio and in Piazza Umbra for the day of the palio.
Live Facebook for Palio and Challenge of sounds.